The red carpet glam of Hollywood it would seem to have nothing to do with the Bolivarian dream of the great homeland. However, there is an artist who managed to reconcile both concepts. Is about Danny Glover, the co-star of the “Deadly Weapon” saga that, at the age of 72, he learned to move with the same comfort between the American paparazzi and the most important leaders of Latin America. A friend of Hugo Chávez and Lula Da Silva, he visited Argentina for the first time in March and this week he signed the request to support Florencia Kirchner. Without a doubt, a true militant actor.

On the occasion of the International Day for the Elimination of Racial Discrimination, which was celebrated on March 21, Glover was invited to the country by the Metropolitan University for Education and Labor (UMET) and the organization Diaspora Africana de Argentina (DIAFAR). The actor, who is a renowned activist in the United States and a UNICEF Goodwill AmbassadorHe spent three days in Buenos Aires.

Glover arrived in Argentina with his friend James Early, a longtime activist for the African-American community and a board member of the Institute for Policy Studies. It was Early who was in charge of publishing on social networks part of the Buenos Aires city tour that they carried out: The actor gave talks, was recognized by the Buenos Aires Legislature as a guest of honor, received a distinction from the Argentine Association of Actors and met the Mothers of Plaza de Mayo.

National connection. Just two weeks after Glover visited Argentina on April 7, sand published in Página / 12 the requested one entitled “With the sons and daughters, no.” The text denounces the “persecution” and the “siege” suffered by Florencia Kirchner for being the daughter of former president Cristina Fernández. In addition to the Hollywood actor, personalities of the stature of Lula da Silva or Rafael Correa signed in support.

It is not the first time that Glover has been involved with Argentine affairs. In fact, In 2017, she had participated in a campaign that Cristina Fernández spread on the networks to denounce “neoliberal abuses” of the government of Mauricio Macri.

On this occasion, Glover carried out all the activities together with Nicolás Trotta, the rector of the UMET. In fact, in an interview that the academic conducted for Página / 12, the actor explained that his political commitment has to do directly with his profession: “The artist is the guardian of the truth,” he assured.

(Also read: Search for florence Florencia Kirchner will not return to the country this week)

His view on the political role of the films seems far from the saga that made him famous worldwidel. Today the actor prefers to get involved with deep stories. During the interview, in fact, he remembered “Zama”, the film by Lucrecia Martel (2017) in which he participated: “He gave us an expression of what is happening in this country. He managed to channel channels of discussion on colonialism. That is what art should do. It helps us to recontextualize, to focus on different issues that affect us ”.

His three days in Argentina were intense. In addition to the distinction of Illustrious Citizen, which the legislators of the City of Buenos Aires voted unanimously, he gave a talk at the UMET where the “Nucleus of Afro-Latin American and African Diaspora Studies” was inaugurated and was presented at the Malcolm Space. from Villa Crespo to talk with Afro-descendant families. In each of his public interventions, the actor emphasized his concern about the growing waves of racism that are observed in the world.

However, there was also time to have a good time with the local colleagues. At the Actors headquarters, in addition to having received recognition for their work in the area of ​​human rights, selfies were taken with everyone presentAlejandra Darín, Lola Berthet, Juan Leyrado and Gerardo Romano were there.

(Also read: Alejandra Darín: “Mauricio Macri is not a leader”)

The hosts told Glover about the recent history of Argentina and also took him to visit typical Buenos Aires places. His friend James Early posted on Facebook one of the foods they enjoyed the most: stew.

Great homeland. Glover is the son of civil and labor rights activists and grew up in a family where union struggles were a constant topic of conversation.. In 2009 he married the Brazilian Eliana Cavalleira and has a particular interest in Brazilian politics. Consider that Lula da Silva is the most extraordinary leader in the region. He has known him since before the leader of the Workers’ Party was president and he recently visited him in the Curitiba prison.

In addition to having supported Fidel Castro, he was always considered one of the stars closest to Hugo Chávez, with whom he knew how to maintain a friendship. With a deeply critical look at the international politics of the United States, both from Donald Trump and Barack Obama, Glover’s is one of the public voices defending the government of Nicolás Maduro.

Glover leverages his Hollywood fame to further his activism for the rights of Afro-descendants throughout America. He makes committed films and rubs shoulders with power. Will the meeting with Cristina Fernández come? 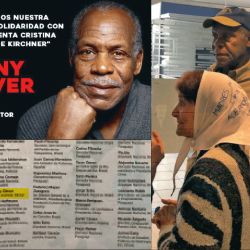 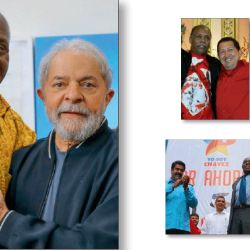