Salzderhelden – what a place name! It fires the imagination and promises interesting stories. Anyone who crosses the large valley bridge of the B3 by train or car will see it as white lettering on the slope. What kind of place is that? We checked and checked Salzderhelden including Heldenburg and Leinepoldern for its suitability as an excursion destination for families.

Excursion to Salzderhelden near Einbeck

Salzderhelden is a small nest in southern Lower Saxony, not far from Göttingen. The region is called Leinebergland. Salzderhelden has not been an independent municipality since 1974. At that time the spot became a district of Einbeck. (The district town four kilometers away now has 46 of them. My father was born in one of them.) Currently, a good 1700 people live in Salzderhelden.

We didn’t experience the place itself as particularly spectacular or overly pretty. But it has history!

Martin and I drove by here countless times on the way to Thuringia to see his parents. Every time the white place name as an oversized limestone puzzle has fascinated me. But somehow I never googled.

Our city trip to Einbeck as part of our #cities4family-Cooperation finally gives us the opportunity to explore Salzderhelden. We are traveling as a family of four with toddlers (2) and teenagers (17). 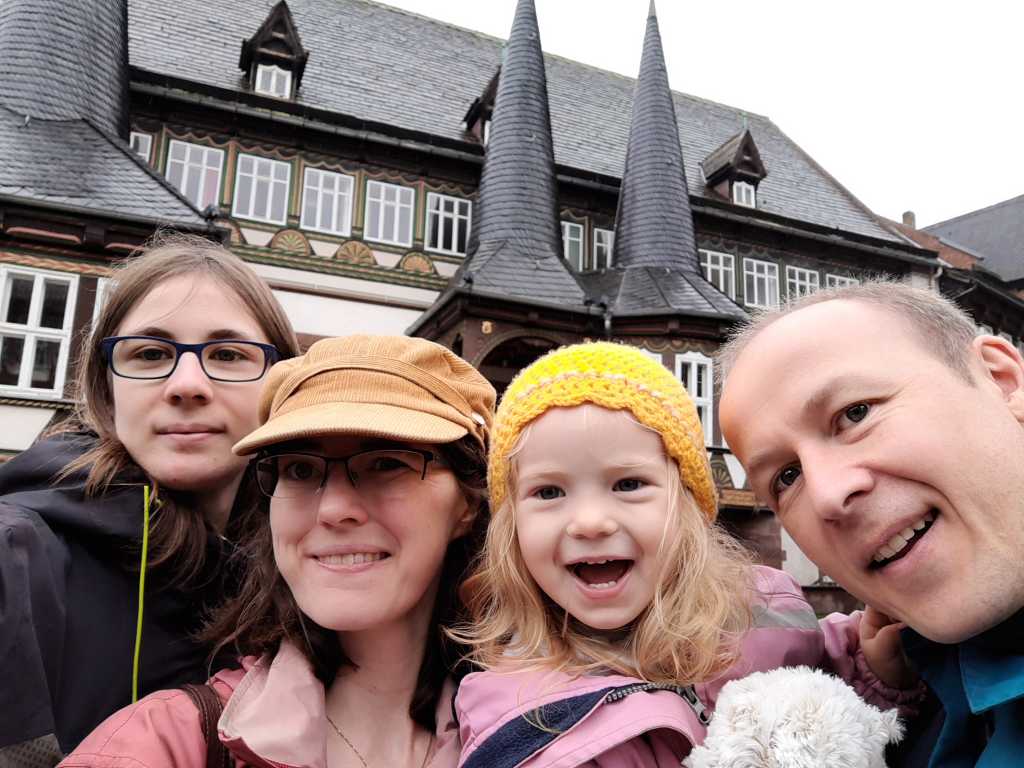 The four of us in Einbeck in front of the old town hall.

Highlight: By train to Salzderhelden

From Einbeck we take the Ihme-Bahn to Salzderhelden. The short train ride is a real highlight for our toddler. The trip in one direction takes just six minutes. There is still a stop in nowhere. Then we drive into the small train station in Salzderhelden. 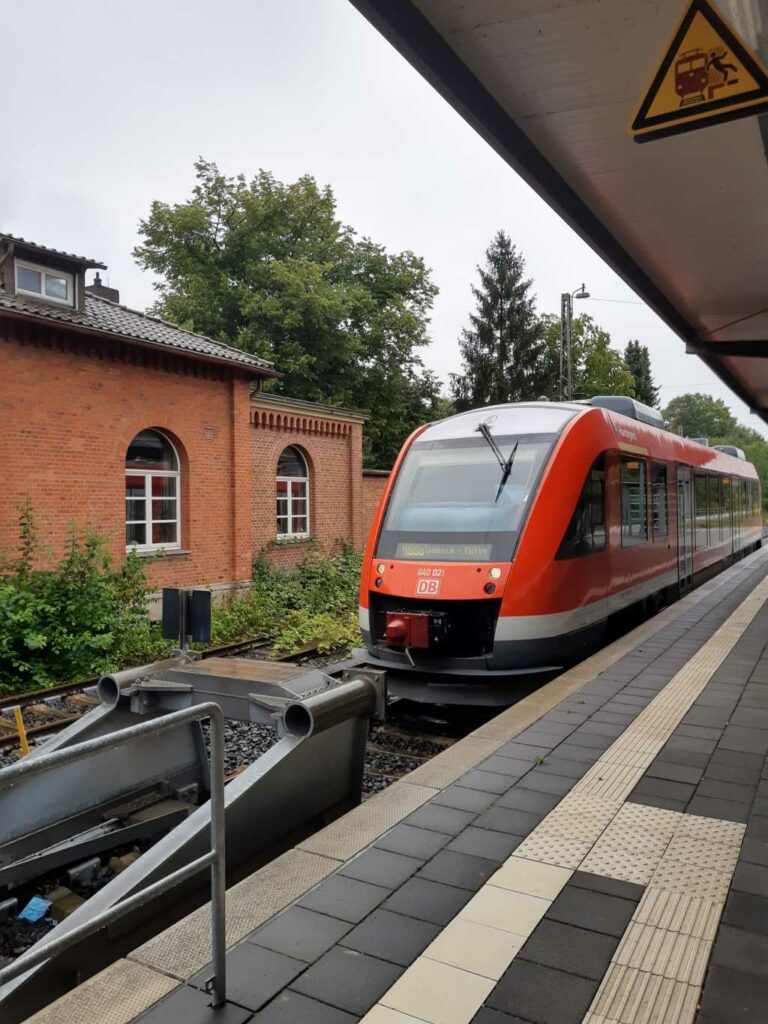 In Salzderhelden, it’s the end of the field – although that actually applies to Einbeck. In terms of its tracks, Salzderhelden is Einbeck’s gateway to the world.

There is a small terrace directly in the extension of the Sack Track. It belongs to the “zur Molli” café, which sees itself as a “solidarity-based hands-on kiosk”. He is purely voluntary, with a lot of love and according to the principle “pay what you want“Operated. Unfortunately, during the week (except on Mondays) it only opens in the mornings when commuters are out and about. On Sundays from 1 p.m. to 4 p.m. there is a track concert with home-baked cakes. (Unfortunately we just miss that.) 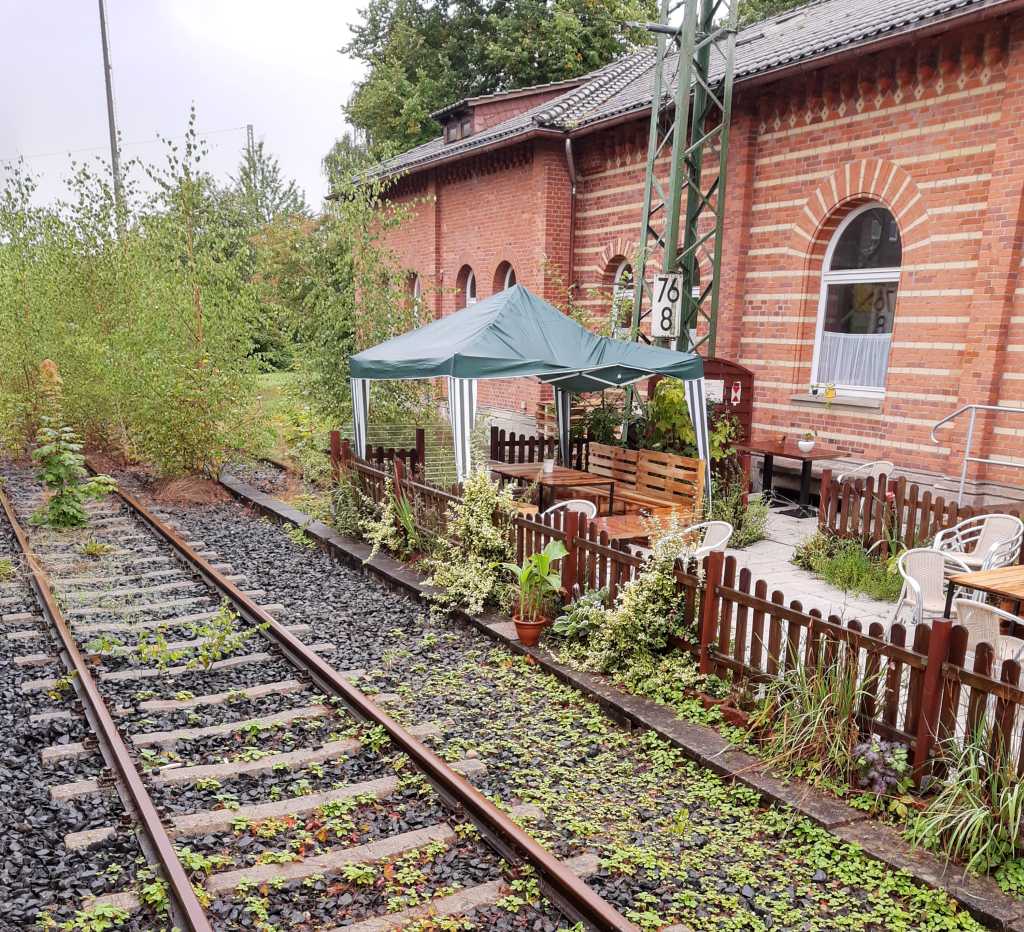 The station café is idyllically located in the Jungwald, so to speak.

The station piano is always accessible. Everyone can play here. 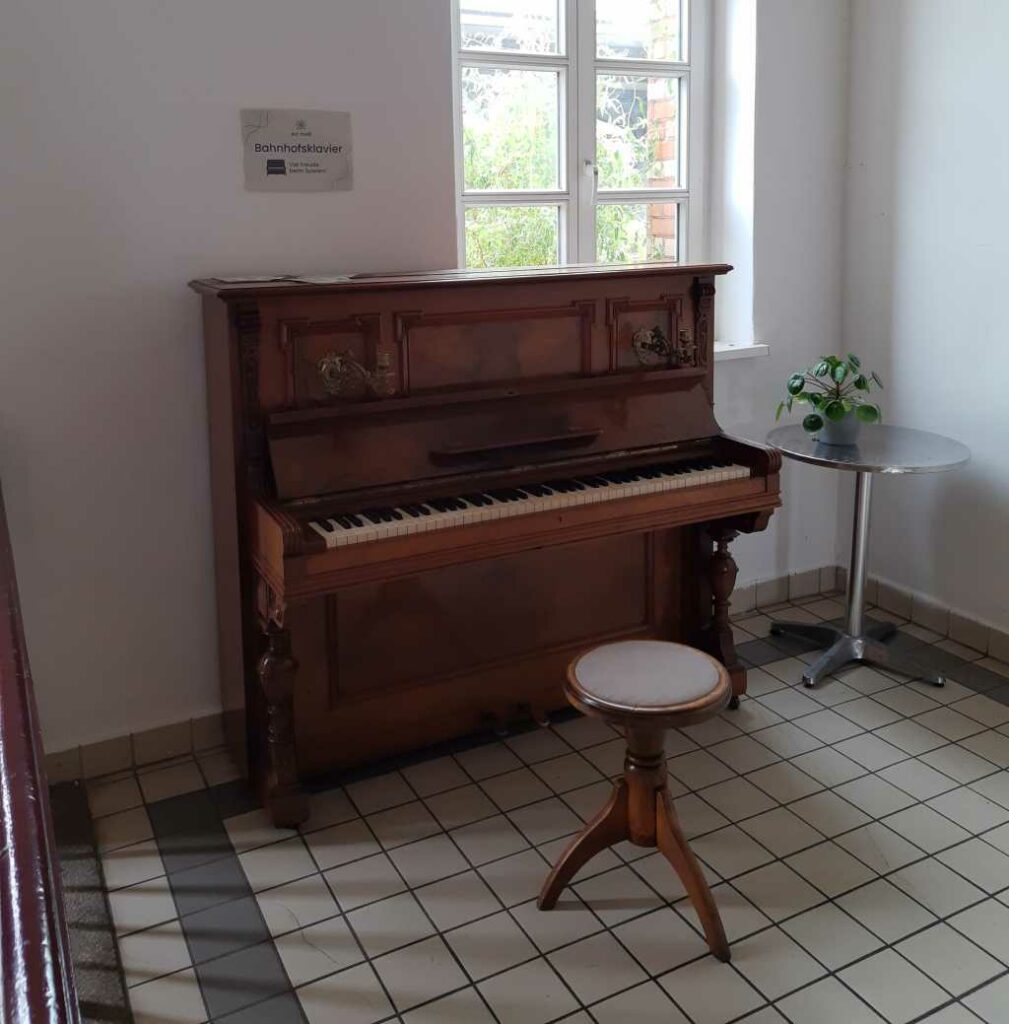 In my Instastory (in the Einbeck highlight) there is even a video of how I play on it.

The Leine flows between the train station and the old village center. We could just cross it quickly over the car bridge. Or we take the little longer detour via the Leinepolder barrage. So we immediately get an impression of the region’s greatest ecological treasure. 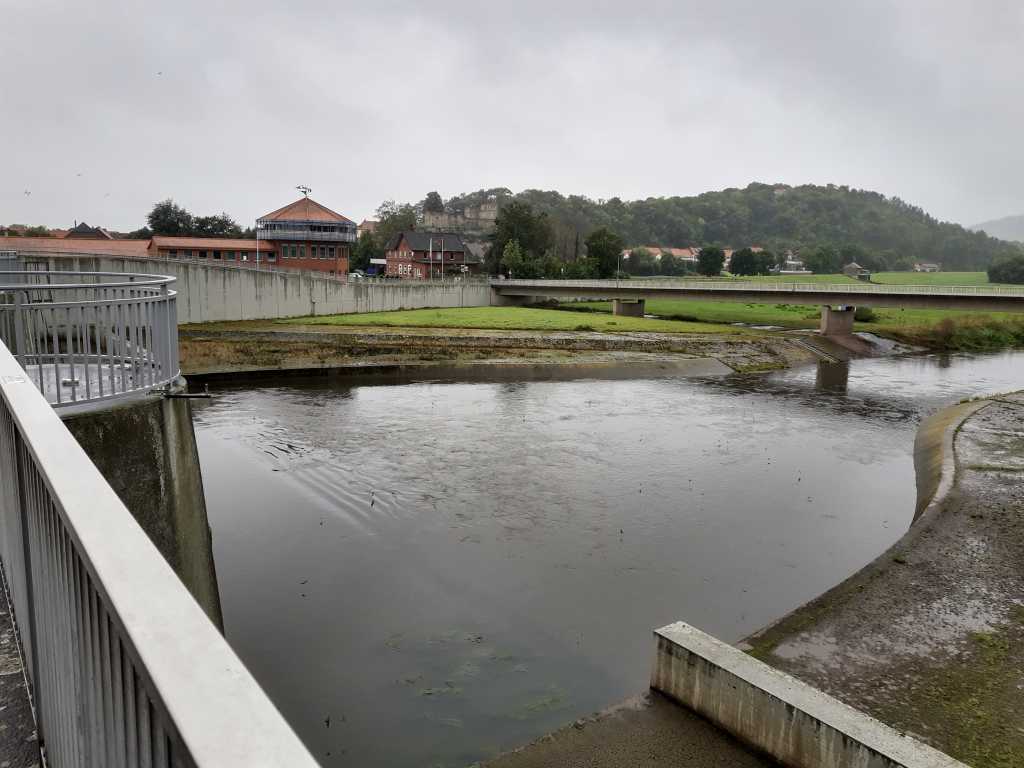 The round tower at the back is the control unit. The castle ruins shimmer in the background.

Around 30 dams stretch around the river from Northeim to Salzderhelden. They form five polders, i.e. areas that can be flooded if necessary. A work on the closure controls the water masses in the area. The construction of a large retention basin began as early as 1972. The complex facility was completed in 1994. 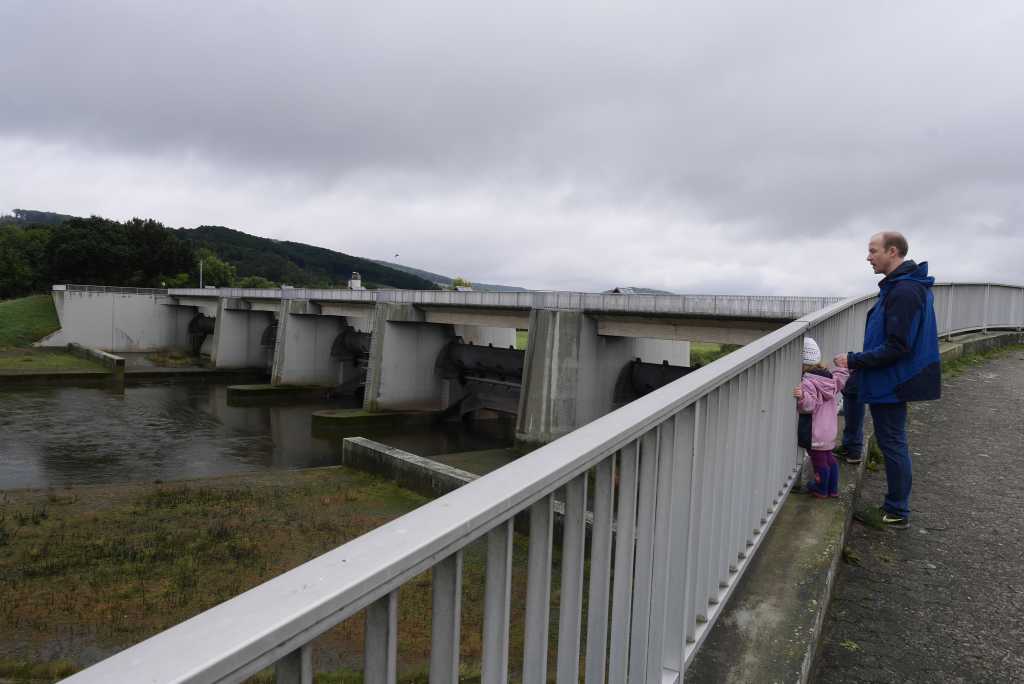 The building is admittedly not that pretty.

What was planned as flood protection in a technology-oriented time has since developed into an important component of nature conservation. Although at first glance there was massive interference with nature, important retreats for native waterbirds and migratory birds have emerged on the other side. Storks, kingfishers, herons and cormorants, for example, have settled in the Leinepoldern or regularly stop here. 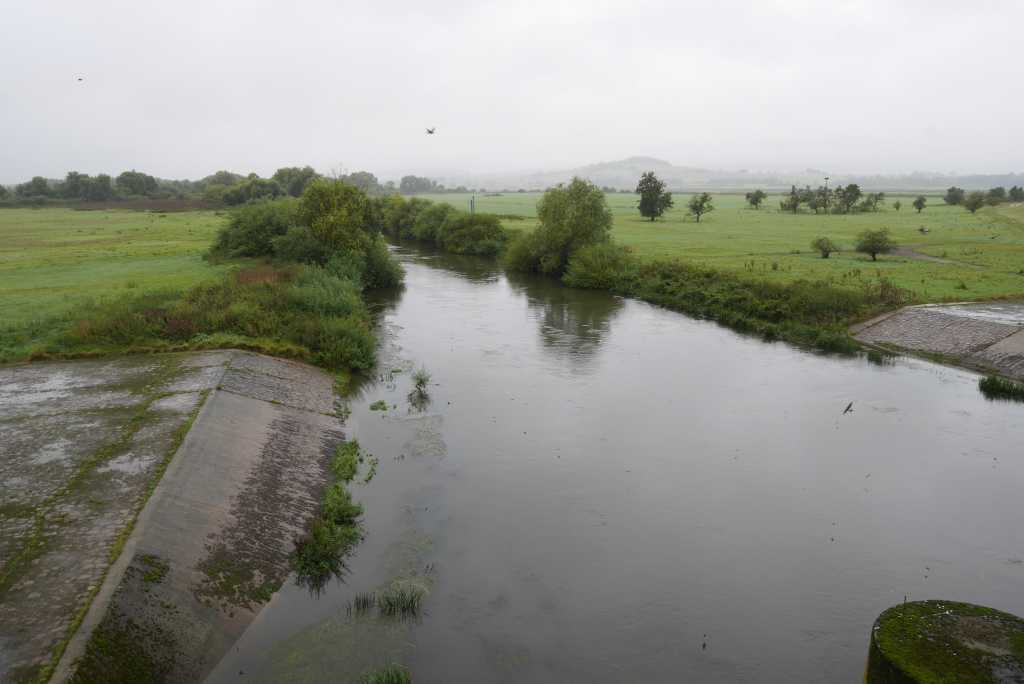 Even if you don’t see much of it in my photo quality: Every dark point is actually a bird.

Coming from the train station we walk straight to an information board. Here we also find a QR code for the new listening stations. The online audio guide provides audio plays a few minutes long with background information on the nature and history of the place. 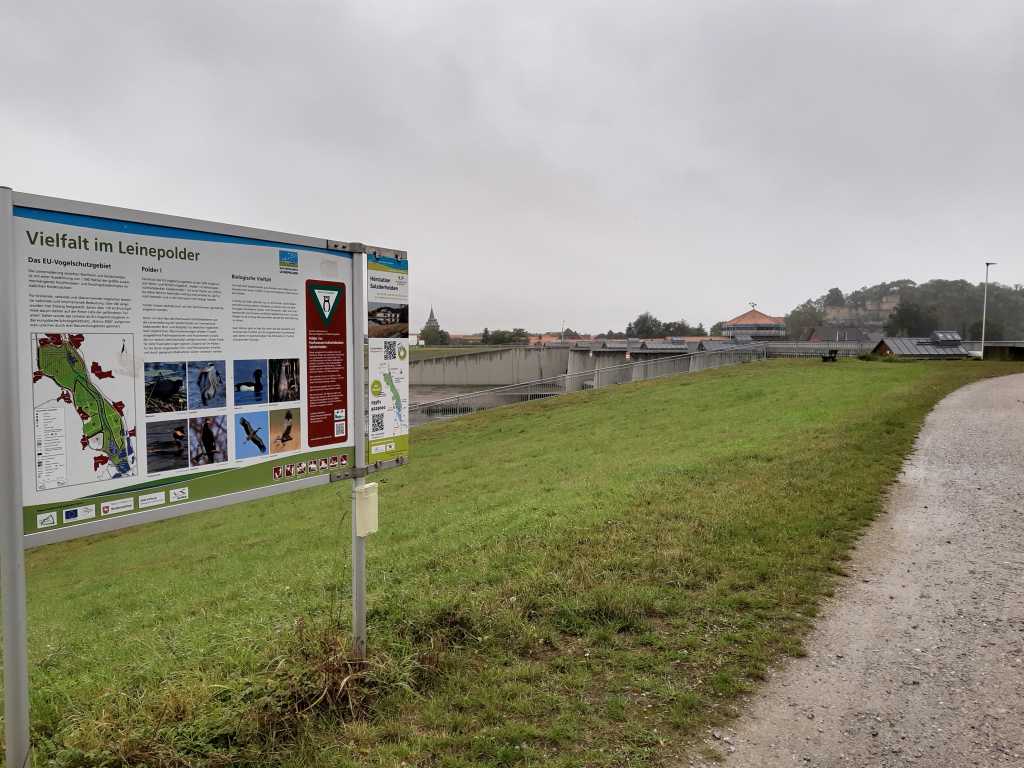 Because the weather is pretty bad today, we forego the hike through the nature reserve that we were actually toying with. Instead we leave it with a short walk over the weir into the town. While listening to the audio guide, we can see different species of birds. That’s enough for a small impression. If you want to delve deeper into the subject, you can refer to the Leinepolder Website inform. (I could very well imagine a bike tour here, for example.) 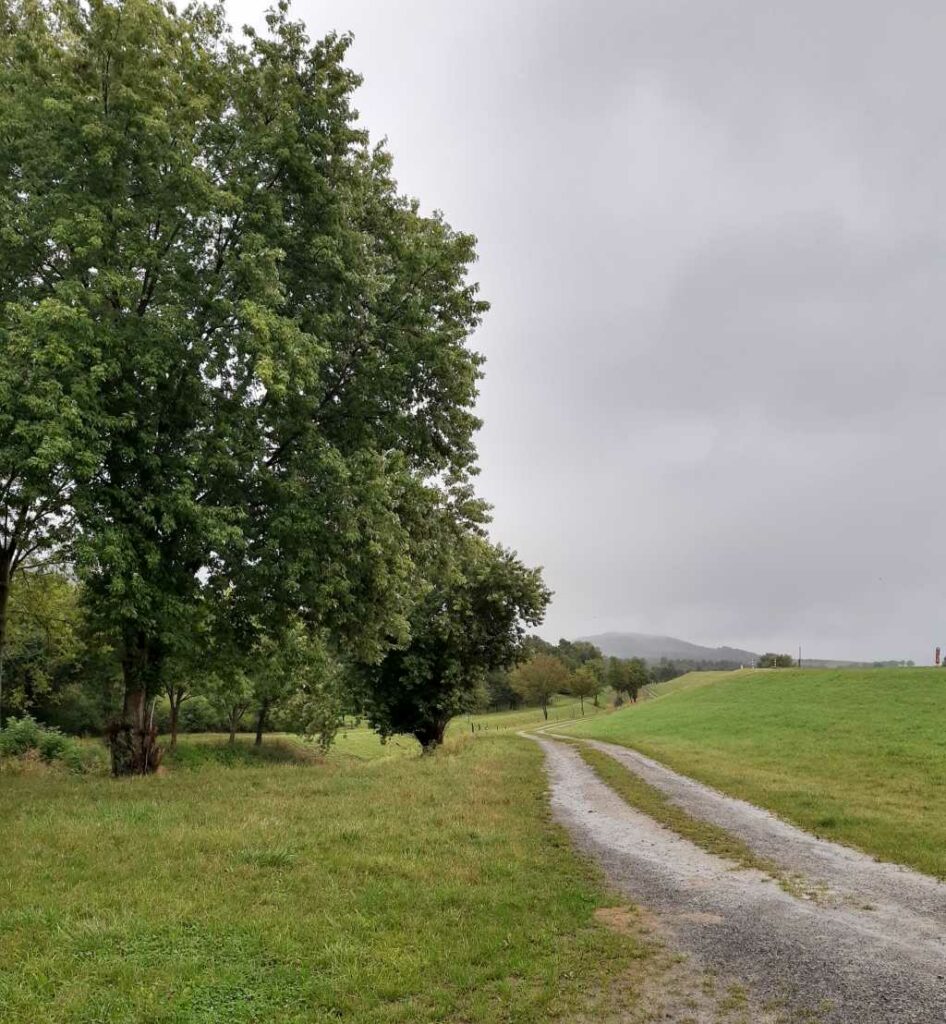 That would be the way into the middle of nature.

The ruins of the Heldenburg

The biggest attraction of Salzderhelden is the castle ruins. The old Heldenburg towers over the historic town center. From here the view goes far over the Leinebergland (if the weather is better than when we visited). 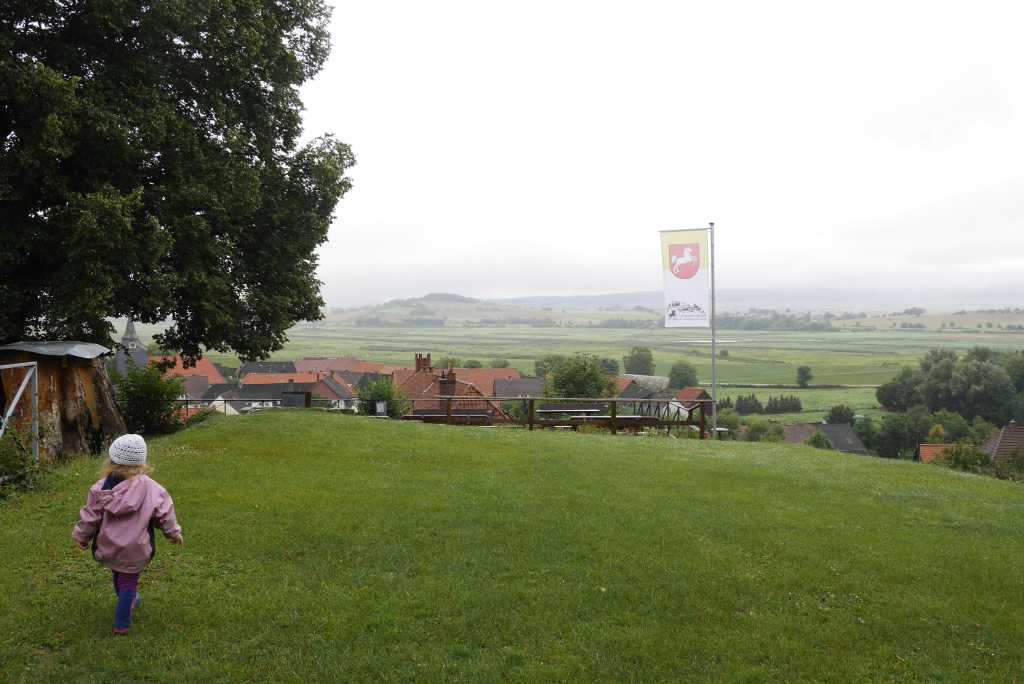 The coat of arms, which later became the “Lower Saxony horse”, was probably used for the first time at the castle.

The climb is steep but short. We approach the ruin through the moat. On this path we also learn a lot about the history of the building. Information boards are waiting for us at regular intervals so that we can organize our way well. 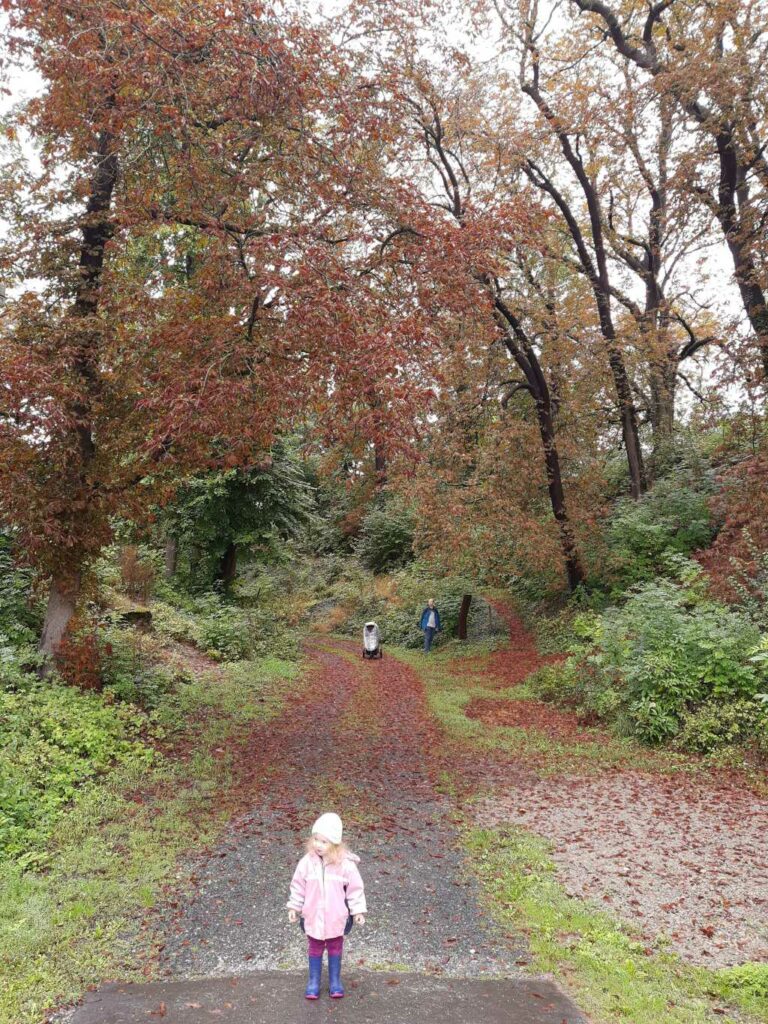 It is a few hundred meters from the main road up to the castle.

As we learn, the Heldenburg served as the residence of the Guelph Principality of Grubenhagen from 1291 to 1596. Above all, it was supposed to secure the salt spring that was at the foot of the hill.

Unfortunately, this explains the place name in a rather unromantic way. No heroes were at work here. There were heaps on the edge of the salt production, the tonal discolored in the course of time and changed to a nobler word. 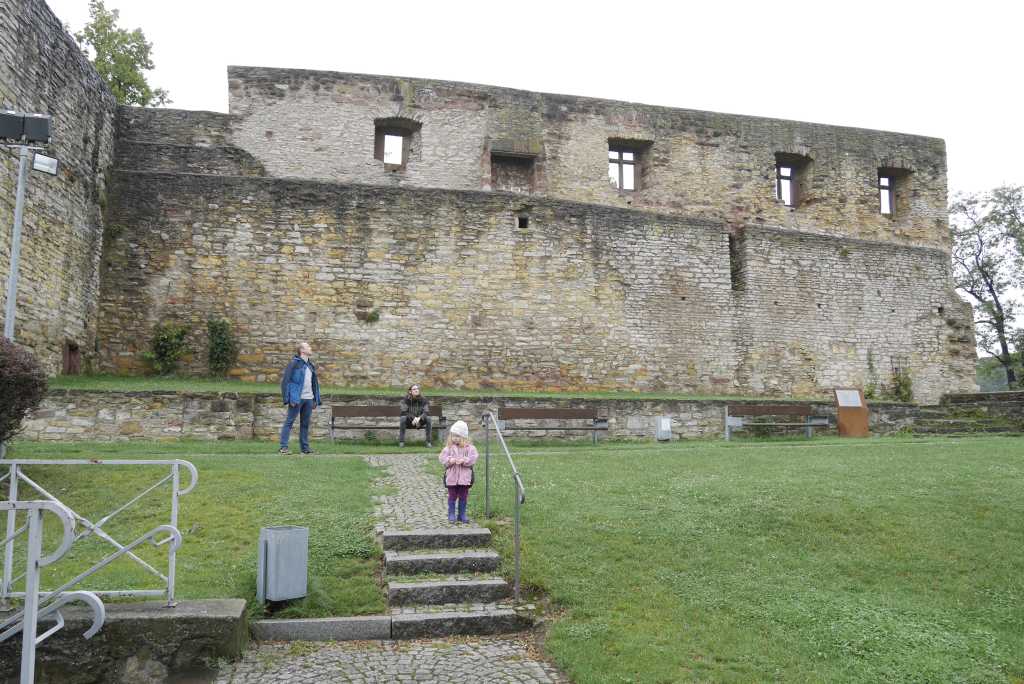 Visit of the castle on your own.

If you like, you can book a personal tour with Dirk Heitmüller. (I don’t want to publish the phone number without asking, but it’s here on the Salzderhelden-Website.)

You can just as easily visit it on your own. So we do it. The tour with the professional is sure to be enlightening and interesting. With a small child (and experience has shown that teenagers are only moderately motivating), we are more flexible. 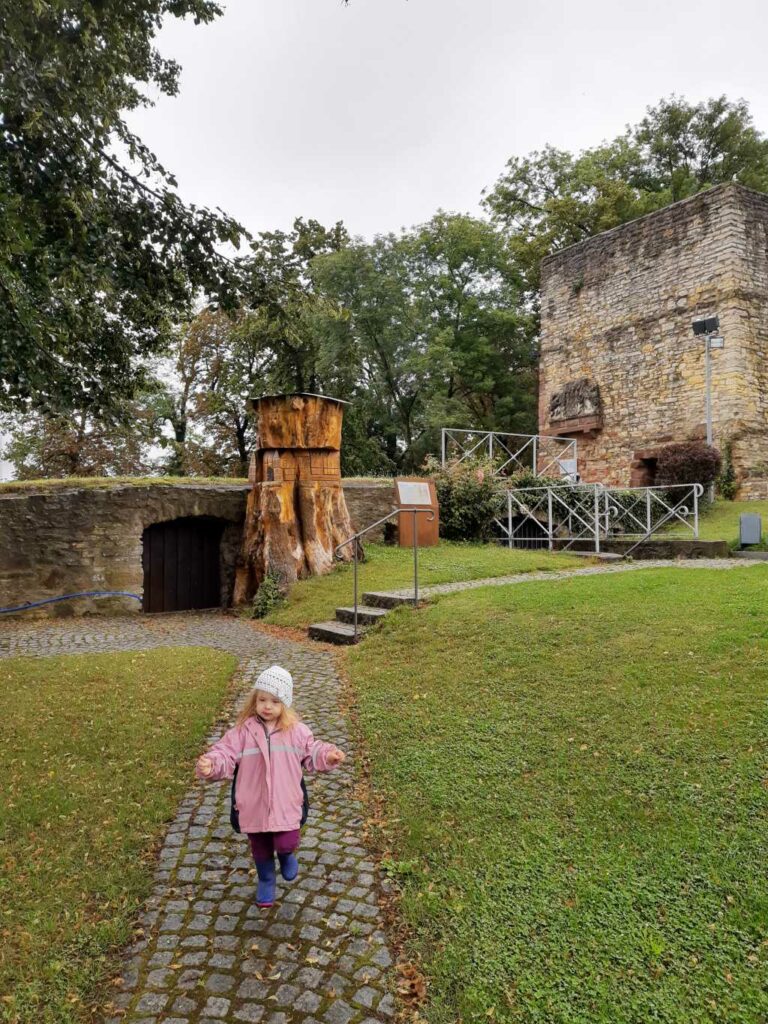 So we can take as much or as little time as we want. All in all, as hard-working info board readers, we need about three quarters of an hour.

There is not so much to see in the ruins of the Heldenburg. The remains of the castle chapel have been preserved. They are occasionally used as an outside church, so they have seats and are not freely accessible. Two towers and two beer cellars are also clearly visible. The outer wall of the hall is particularly striking. A chimney and a toilet can still be guessed there. 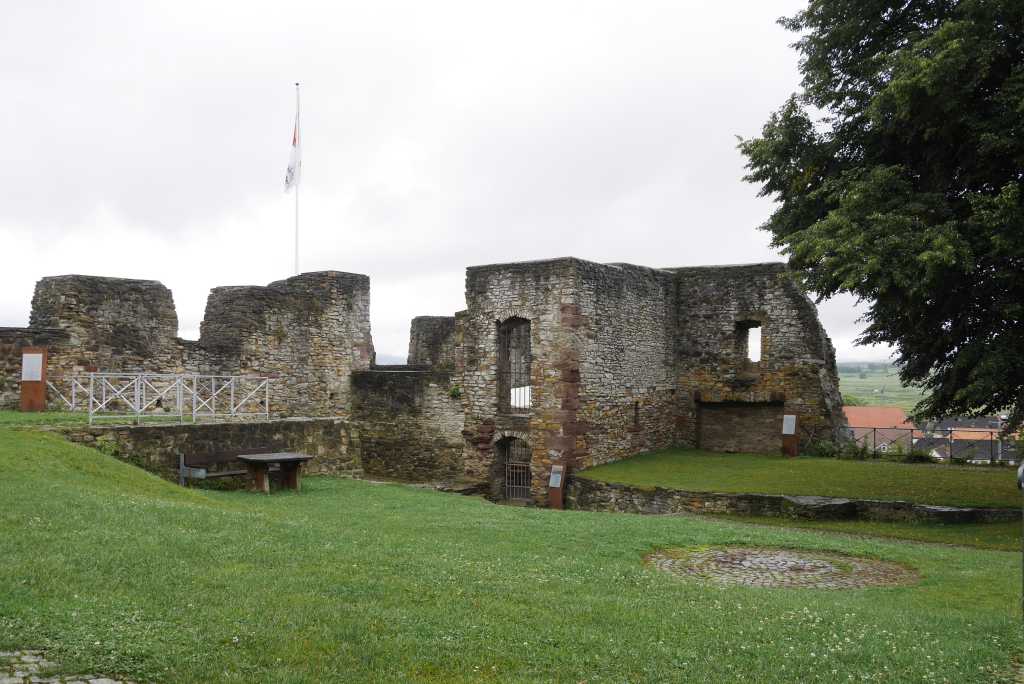 View into the castle courtyard.

There are also several information boards in the courtyard. Several nice seating areas, some with tables, offer good opportunities for a picnic. 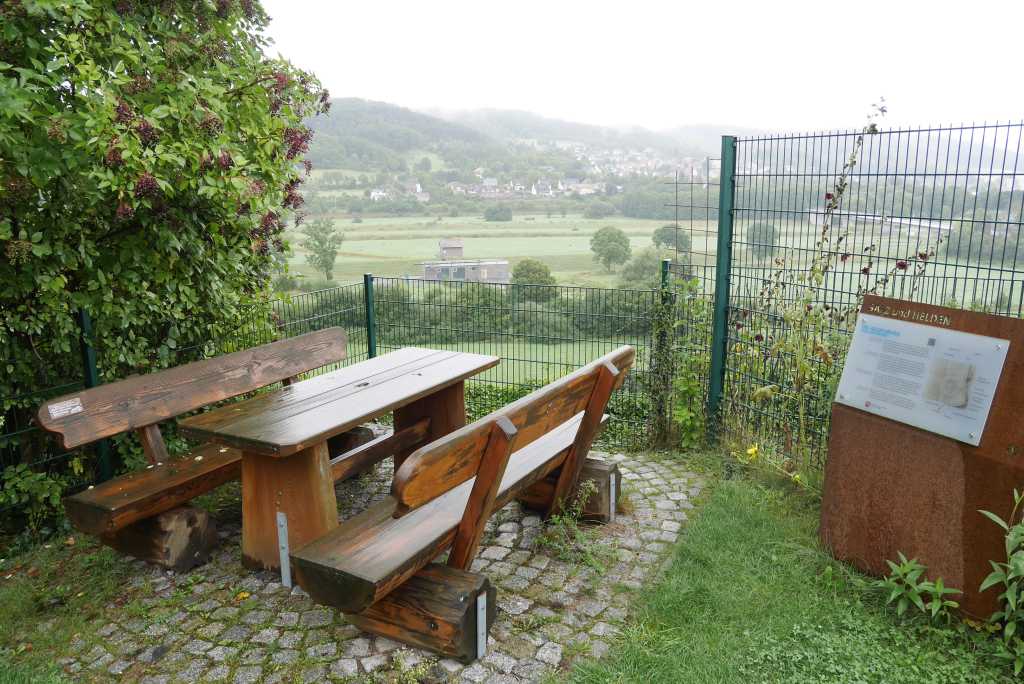 If the sun were shining now …

Those who are less well prepared can stop off at the Burgschänke at the foot of the castle. There is also a parking lot here.

Unfortunately, we don’t make it to the eponymous nucleus of the place. The salt works can look back on a long and eventful history. The brine spring, which was simply skimmed off, developed into brisk salt production as early as the Middle Ages. New techniques were used as early as the early modern era to increase yields and ensure profitability. From water art to steam engines to the electrification of pumps, the company ran until 1960.

After that, a cultural promotion group had the industrial monument returned to the state it was in around 1930. The historic site served as a museum – until it was completely destroyed by arson in July 2020. At the moment the association is collecting donations for reconstruction. Current information is available Website.

The fly in the ointment

At this point I would like to mention that we had a very unpleasant experience on the way back. Sure, there are unpleasant people everywhere. But it’s difficult to avoid them in the small “Hhmebahn”. One of our few passengers (without hair, in combat boots) shows very aggressive behavior. He’s not wearing a mask. As soon as the train starts moving, it begins to rattle and cough. He looks challengingly around the group. It is clear from the outset that friendly requests will not help here.

A train attendant is not in sight. I solve the situation for myself by simply sitting in the empty first class with the toddler. (Franka wears a mask in public transport and similar situations, but only knotted fabric masks fit her halfway. And her motivation for doing this is always great at the beginning, but never lasts long.) The rest of the family trusts FFP2. (And ultimately neither corona nor tuberculosis or smoker’s cough – whatever said bag may have coughed up on the train.) 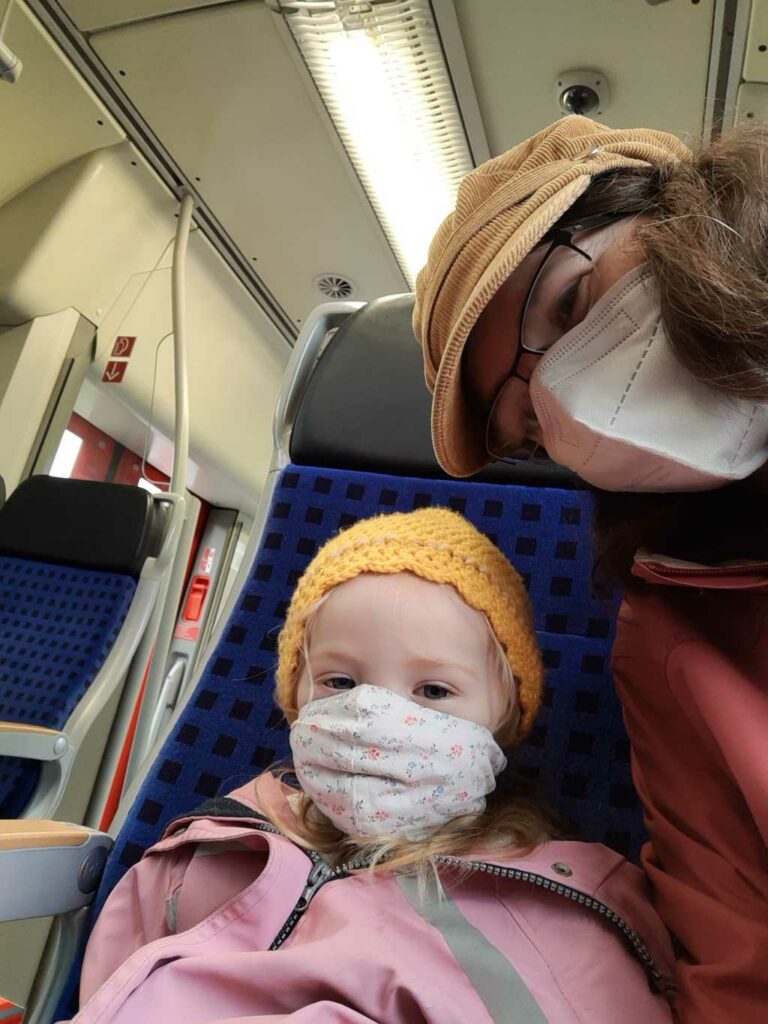 If everyone is wearing a mask, rail travel works wonderfully.

It’s a shame that Salzderhelden said goodbye to us so stupidly. Because overall our little trip was so nice!

Those who hang around in Salzderhelden should definitely not skip Einbeck! The district town is beautiful with its half-timbered facades. With the PS memory, it is also an absolutely recommendable destination. I wrote about it in detail here: 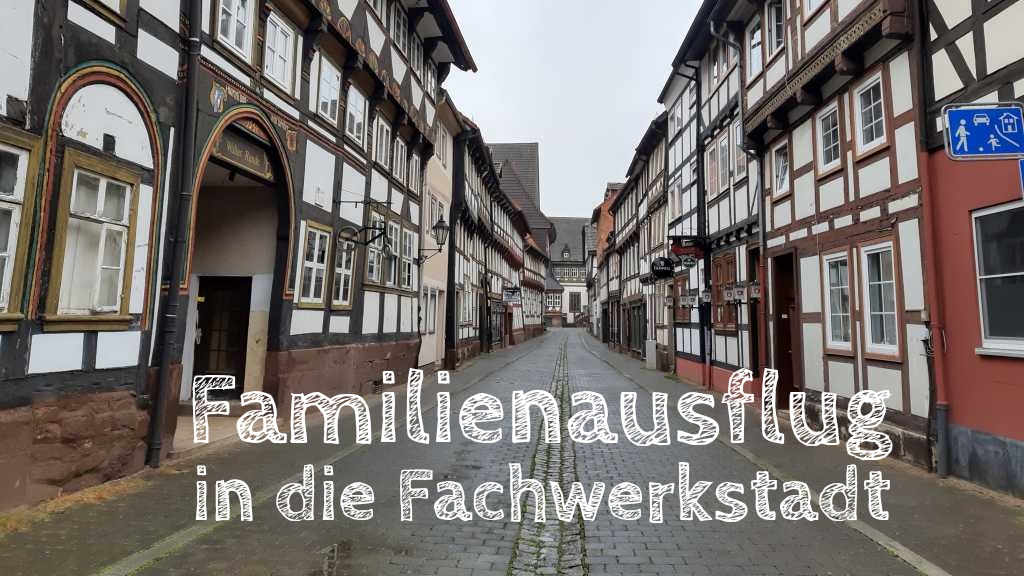 Einbeck is a great destination for families.

Other beautiful cities are nearby, which are also easy to explore with children

There is even more inspiration for city trips with family in Lower Saxony here: 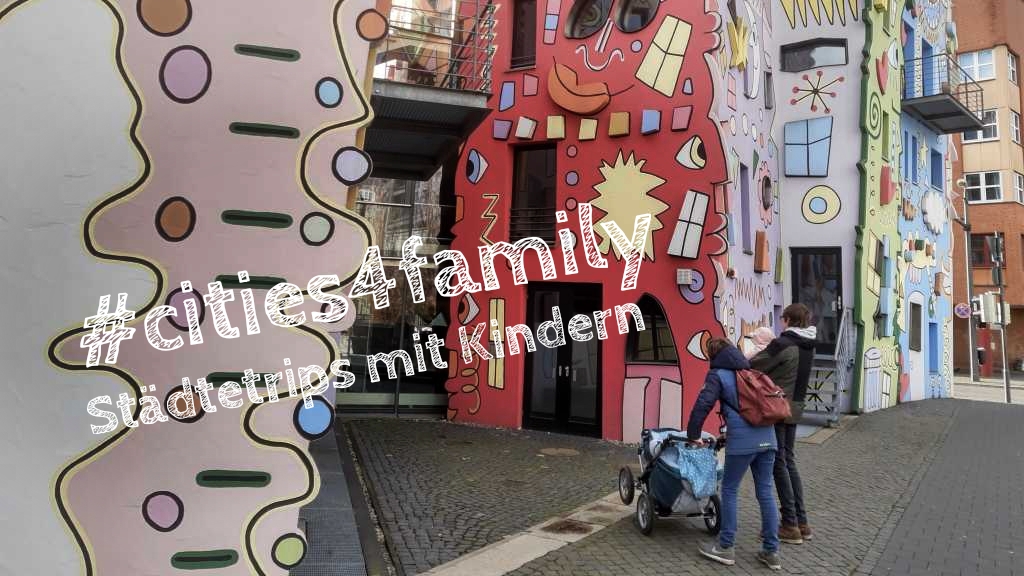 Ideas for 18 city trips for families!

I have listed all of our first-hand experience reports (now over 190!) In this post and also linked them there on the map of Germany:

There really is something for everyone here.

Transparency notice: Our trip to Salzderhelden was part of a paid research contract for the blog of the marketing group about cities. That and how I write about it here in my own travel blog is my own decision.